Us Brits constantly redecorate our homes 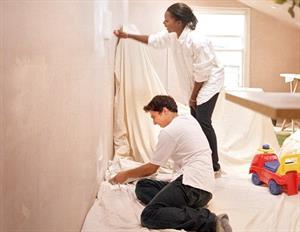 1 in 4 Brits constantly redecorate their home! The British obsession with property doesn't end with finding the perfect home. Many of us never stop redecorating once we get there, according to new research. Two years after Brits have spruced up their living room with a lick of paint, they are hauling out their brushes and rollers to start over again. According to research from interiors retailer Furniture123, Brits redecorate their living room every 25 months on average. Bedrooms are given a makeover every 29 months, while the dining room is jazzed up every 33 months. And one-in-four British homeowners admit to 'constantly redecorating' their homes. Why is this happening? While some householders undoubtedly get tired of the same shade of wall colour, one in four Brits said they redecorated regularly to keep up with interior trends. And 19% said they did it for 'enjoyment'. Mark Kelly, marketing manager at Furniture123, said it was ‘understandable’ that Britons choose to decorate rooms so regularly: “While interiors trends are ever-changing, the simple redecoration of a room can make a person fall in love with their home all over again." However, he added that the desired effect can be equally achieved by updating accessories or furniture and doesn’t always have to include a full redecoration job. The survey of 1,000 homeowners found that more than half (55%) of Brits said they have a room in their house that is currently in need of decorating. Although lounges, bedrooms and dining rooms are regularly refreshed, people are, unsurprisingly, not as keen to tackle the bathroom, sprucing that room up every 37 months. Hallways are even less popular, being rejuvenated nearly every 45 months. Brits reported it took an average 9.5 days to finish the job, with 22% claiming that once the room had been completed, they move straight on to the next one. Londoners are the keenest decorators, with almost one in three (31%) admitting to 'constantly redecorating their home', followed by Manchester at 30% of residents. Nottingham householders are the least enthusiastic about home makeovers, with just 9% redecorating on a regular basis.